Can kratom plants / cuttings be grown at home ? 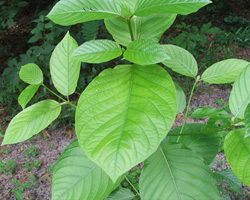 The simple answer is YES ! I would highly recommend anyone to grow their own Kratom Plants. One needs to be careful, because Kratom Plants grow into Kratom Trees... 10-15 meters tall (although this takes years). Personally, I enjoy anything I've home-grown... tomatoes, potatoes, salvia, kratom... the list goes on and on.

There are a small number of web sites and nurseries where you can Buy Kratom Plants. They make great house plants and the fallen leafs can save you a little money.

Overall, Kratom plants grow best if you simulate their natural environment. In a tropical climate they can be grown outdoors. Overall; they dislike cold, will not stand frost, prefer a humid environment and should be fertilized every few weeks (during growth periods).

Although not scientifically studied yet, there is anecdotal evidence that indicates kratom grown in climates which are cooler than their native habitat tend to produce weak leaves. In warmer subtropical climates, there seems to be some seasonal variability, with more potent leaves growing from late summer through autumn and weak leaves in winter and spring. Greenhouse grown plants are reportedly also not very potent. Whether this indicates a relationship between temperature and alkaloid production or is even consistently true has not been thoroughly researched, but it seems likely this is the case. " murple

There are several strains of Kratom Plants available in the USA. Some common ones are the Rifat & Bumblebee strain.

The following is a cloning guide for Kratom Plants

Over the last couple of years I have seen the subject of cloning kratom brought up in many discussions. Most of those who knew how weren't talking, some even went as far as calling it a trade secret LOL. So I decided to try it using methods I had used to root other plants, how hard could it be, its just a tree after all. I thought I would share what I learned with those that might find it useful, the more kratom trees we have in the states the better imo.

I've used Miracle Grow potting soil, and later Jiffy seed starting mix for this, Miracle Grow is pretty lame stuff, all things considered, its just the cheapest acceptable potting mix available around here. I have not noticed any difference between either mix I've used, as far as rooting success is concerned anyway, pure peat moss would probably work just as well.

I normally use clear or translucent drinking cups, the size is not not that important, the smaller the cup, the sooner you have to repot.
I like clear so I can see the roots sooner, this helps me start getting them adjusted to a lower humidity as soon as possible, which in turn lessens the possibility of fungus problems. You should keep them bunched together so the cups are shaded, and repot once they have roots showing. I have read its not good for the roots to get much light exposure, after some testing I tend to agree. One could use solid cups to avoid this, just check the drainage holes for roots.
Drill or poke holes in the bottom of your cups, and fill with your potting mix.
Water the potting mix till it is saturated, its best not to have pockets of dry peat moss as it can cause your cutting to fail.

Clean your blade with alcohol and take a four node cutting, then remove all but the two top sets of leaves. A three node cutting may work as well, I can't really say as all I have tried have been four node cuttings. I will be trying a few three node cuttings in the future to see how well that works. I used rooting hormone on about half of the cuttings, and then inserted them into the potting mix between 1-2" deep. There was no noticeable difference between those I used the rooting powder on and those I didn't. If you end up having a fungus problem try the rooting powder and see what happens, it may help.

Put the cup in a gallon size ziplock, and zip it closed, don't put more than one cutting in a bag, because if one fails it can contaminate the others. Don't water it again until there is no longer condensation actively forming in the bag, don't let it dry out though, the potting mix must remain moist. The fastest way to kill a cutting is by rotting it from being too wet, on the other hand it can't dry out much till it has roots or the cutting will die.
Just keep an eye on it, mine have always had roots forming long before it was time to water.

When you see a good root system is developing, unzip the bag and pay close attention because this is the tricky part. If your plant starts to wilt close the bag until it recovers and start again, this will more than likely happen. Try to remember how long it took to wilt and mist it before that time next try.
Once it gets to the point it can handle this lower humidity pot it up and make a humidity dome.
I like to use the clear gallon jugs I bought my distilled water in, I just cut the bottom off.
You can skip the bag/cup and just use the dome from the beginning as well. but in most cases its better to pot up as you need to.
Another problem with not using cups first is that you won't be able to see root growth for a long time, that is unless you disturb the plants growing mix, which can stress a freshly rooted cutting, and cause other problems as well.

Start out by leaving the cap on the dome, then after a couple days take it off, in a few more days cut a small hole in the water jug, about 2" in diameter will do, you can use tape to adjust the air circulation if its too big at first.
From here you can keep cutting holes or start taking off the dome for short periods of time until the plant can deal with outside humidity levels without wilting. Try misting it with the spray bottle at the first sign of it wilting during this process, if it doesn't work cover holes, or put the dome back on, depending on where your at in its humidity adjustment.
Getting your plant use to being outside of the humidity dome is the most difficult step in the entire process. I have lost several by forgetting to put the dome back on soon enough.
If you do happen to forget to put the dome back on and your plant looks dead don't give up on it, just put the dome back on and mist it. I've had my best luck saving them when they get badly wilted by removing all but the two top leaves before placing them back under the dome, a little trick I learned from growing brugmansia trees. For best results take your cuttings from actively growing, disease and insect free plants.
As far as lighting goes, I've had luck starting the cuttings in total shade outside, by using grow lights set on 16 hour cycles, and some I started under grow lights I turn on and off at different times every day. I did get a better growth rate from the ones under timed lights. If you opt for growing outside in the shade make certain direct sunlight never hits the bag/dome, if it does it may kill you plant by superheating it.
Like all plants kratom will have an optimal temperature in which it will root best, more than likely it will be variable, with a high and a low during a 24 hour period.
What this ideal temperature range is I do not know, if anybody does I would be interested in the information.
One can use heating pad or propagation mat for bottom heat when its cool out, but I didn't. The temperature at which I rooted half of these cuttings at was pretty much the same as the air temperature the mother plants where being exposed to, approx 65-100 degrees.
This is a pretty extreme when it comes to rooting many plants, but it seemed to work well for these kratom cuttings.
However, the cuttings did not receive any direct sun like the mother plants did, just bright indirect light.
The other half were done inside at room temperature under grow lights, which was slightly cooler than the outside temperature.

Well that's pretty much it. If you try it and do well share a plant or two with friends, its good karma!

There are other methods for cloning and growing kratom plants that we are experimenting with.

Check back often as this site is updated regularly as we become more experience with Kratom Plants. I personaly bought 4 kratom plants which are now around 3 ft tall. I plan on cloning these plants and offering them to friends. I will document the entire process and share with readers of this kratom website.